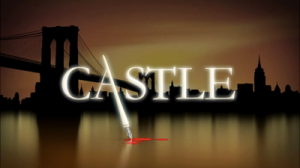 Today’s blog has been brought to you by the TV series Castle and the letter N.
There is always a temptation to allow the logic of a story push you into an unnecessary scene. A good example of how this can be averted is demonstrated in Andrew W. Marlowe’s script for the pilot episode of Castle.
The series premise, that playboy author Richard Castle will team up with no-nonsense NYPD detective Kate Beckett and solve crimes, is obvious to the audience from before the end of the teaser, thus the only question is how smoothly Marlowe can acomplish the pairing without straining the audiance’s willing suspension of disbelief.

Thirteen minutes in (1st turning point for you structure fans) Castle uses his friendship with the Mayor to wheedle his way into the investigation. Now at this point logic dictates that Detective Beckett will object and that, because she is part of a disciplined service, she will take that complaint to her superior – Roy Montgomery. The audience expects it, I was expecting it and indeed Beckett even says the exact line that everyone was expecting…

BECKETT: Sir, can I talk to you for a minute – in private?

Logic dictates that Beckett should then talk to her boss and lay out the reasons why her working with Castle is a bad idea only to be over ruled and sent off with a flea in her ear. The trouble is that the resulting scene wouldn’t have any real plot or character function – the series focus is squarely on Castle and Beckett the friction should be between them not frittered away on supporting characters. Any such scene will be at least half a page long, probably a whole page and that’s out of a 42 minute show.

a) you could write the scene so brilliantly that nobody cares that it’s slowing down the plot.
b) have the scene happen off screen and reference it in a couple of lines of dialogue.
c) have it happen on the other side of a glass door so that we can play off Castle’s reaction.
Or d) which is Marlowe’s solution…

BECKETT: Sir, can I talk to you for a minute – in private?

There you go, no scene, no loss of momentum, Montgomery is shown to be in charge and have a sense of humour and the whole audience is on Kate’s side because who hasn’t been put in a bad situation by their boss(1).

Now stop procrastinating and get back to work!